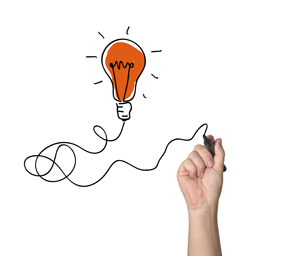 I’ve even known a new business owner who completely abandoned his idea when he found out that a competitor had started more or less the same idea as him a couple of months before – what a shame!

Let’s break this down a bit and look at some facts and then I’ll explain how to protect your business idea, but also why you shouldn’t be too afraid of other people finding out what it is.

Right now, at this moment, about 60% of the working population are sat in businesses all around the country dreaming about starting your own business. However, only about 3% of people actually will start their own business.

Well the most common reason that people don’t start their own business is risk and fear of failure. It’s hard work and risky to develop a business idea and have the confidence to actually start up. And, I believe it takes a special type of person to actually have the courage to go for it.

So, don’t worry too much about other people finding out. Even if they think your idea is fantastic and the best thing since sliced bread, it would take someone in the 3% of the population to actually go for it. Chances are that the people who find out are in the 60% of people who dream about starting their own business, but never will or in the 37% of people who don’t have any aspirations at all to start their own business.

OK, I hear you cry – but what if I tell someone and they happen to be in the 3% of people who really want to start their own business and they steal my idea?

Well, yes there is a small possibility. But, let’s look a bit more closely at this too. Whenever people start up in business, there is a part of them who want to have something unique and a bit different from the competition. So, if they talk to you, they’re likely to abandon any thoughts of stealing your business idea as they’ll want their idea to be unique to them.

And also, the likelihood is if they’re in the 3% of people, they’ll already have a business idea and they’ll be equally as protective about that idea as you are about your idea. Why would they want to steal your idea when they like their idea better?

So, does this mean then that you shouldn’t worry about telling people your business idea? Should you not bother protecting your idea at all?

No, I didn’t say that. I do think it’s worth protecting your idea especially when you’re in the early stages. All I’m saying is that don’t panic if other people find out. Plus, there are some people that you’re going to have to tell i.e. the bank manager if you’re looking to get some money.

How then, should you protect your business idea?

The first thing you should think about is drawing up a non-disclosure and non-competition agreement. If you put in this term on the internet, you should find something that you can adapt to your business. A non-disclosure and non-competition agreement means that if you give it to someone to sign before you tell them about your idea, they promise not to share it with anyone or start a business that’s similar to yours.

You could also think about creating a patent for your business idea and you may want to think about having a chat to a patent attorney or contact the Patent Office for advice. Developing a patent on an idea really does protect the idea, but also be aware that you will be charged to do this.

My final point on the matter is that if you’ve developed a completely unique, great business idea from scratch and then find out two days before you launch that someone has got there before you, please don’t be put off. There’s room in the world for all of us and the additional marketing that they’ll do will help you too. Go for it, have fun and be passionate about your idea.

How to protect your great business idea - To learn more about this author, visit Helen Dowling's Website.